Here's why Pakistan's cotton spot rates will decline in near future

Pakistan’s cotton spot rates are expected to decline in the coming months after experiencing a strong growth until the third quarter of 2021. Some new textile mills are expected to be established in the Punjab region of Pakistan, which accounts for more than 65 per cent of the cotton production in the country. 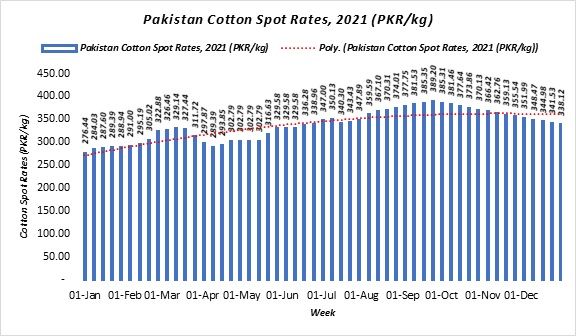 The country’s cotton crop of market year (MY) 2020-21 was attacked by white fly and pink ball worm and the country had to sign new agreements for importing approximately one million bales. Thus, lower cotton production and delayed imports had boosted cotton spot rates. The consistently rising US dollar had also been supporting the spot rates.

However, the price rise will not be sustained, according to industry stakeholders. Cotton production in the current MY is expected to rise as farmers are ready to focus on cotton as they get good returns from the crop. According to the minister for national food security and research, the current condition of cotton is better in most areas of the country. Pakistan’s cotton research agency has also developed a strategy to prevent the attack of white fly and pink ball worm.

In the last couple of months, it showed a considerable rise of 10.34 per cent over the price in the last week of June 2021 due to lower availability of cotton and rising demand. Now it is expected to decline in the coming months of 2021 to reach 338.12 PKR/kg in the last week of December 2021, recording a drop of 9.60 per cent.

Here's Why Pakistan's Cotton Spot Rates Will Decline In Near Future